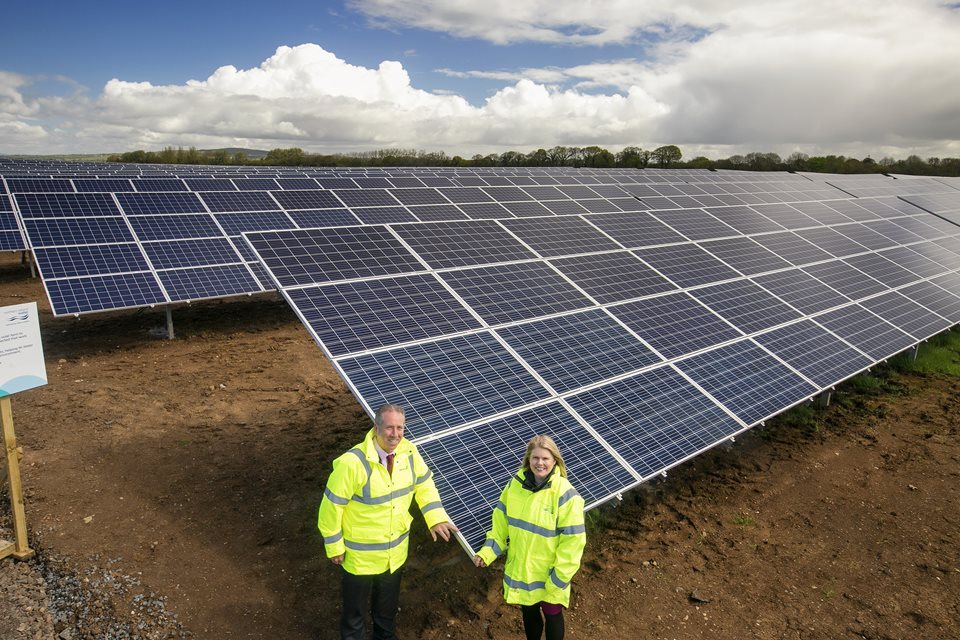 NI Water (NIW) has officially opened its £7m Renewable Energy Scheme at Dunore Point Solar Farm, which will produce a peak output of 4.99 megawatts and is expected to save over £0.5m annually in energy costs.

GRAHAM’s successful connection of this solar farm, on behalf of NIW, was delivered 10 days ahead of programme.

“GRAHAM is delighted to have completed this major project for NI Water, which is the latest in a series of hugely successful collaborative projects between our organisations.

This is an impressive achievement, with 24,000 solar panels now helping to provide a peak output of 4.99 megawatts, with spare capacity going to the grid.”

The Dunore Solar Farm is a 'major step toward' NI Water reaching its goal of increasing electricity consumption from renewable sources, according to NI Water CEO Sara Venning.

Commenting on the completion of the project, Sara Venning said:

“As the largest user of electricity in Northern Ireland, we are committed to finding innovative renewable energy projects to reduce our expenditure on power, which has already tumbled by £5m over the last three years. The Dunore solar farm is a major step toward reaching our goal of increasing electricity consumption from renewable sources from the current 13% to 40% by 2021.

“Dunore is one of many innovative renewable energy projects, which NI Water is developing to ensure we become more energy efficient while also making cost savings to our business.”

The design and procurement of the NIE Networks Control Building and NIW 33KV Substation commenced in early September 2017, with construction commencing in October 2017. Construction of the 32-acre Solar Farm commenced in Mid December 2017 and was complete by Monday 12th March 2018.

As part of our engagement with the local community, GRAHAM and NI Water organised a competition with local schools, challenging them to “Save Water & Save Energy" for their local treatment plant. Laura Daly – a P7 pupil from St Joseph’s Primary School, Glenavy wrote the winning poem. The school attended the official opening and were presented with an iPad as a prize for the school.

Paul Davison, NI Water's Project Sponsor, said: “This is fantastic news – I would like to personally thank everyone in the team for getting this important project over the line. NI Water appreciates the hard work and endeavours of all - this is a great landmark project.”

NI Water is the province’s largest user of electricity and Dunore is its third largest site in terms of energy consumption - accounting for 7% of the company’s annual usage. The major project will provide electricity to Dunore Point Water Treatment Works in South Antrim. The farm is located on a 33-acre site on the eastern shore of Lough Neagh.