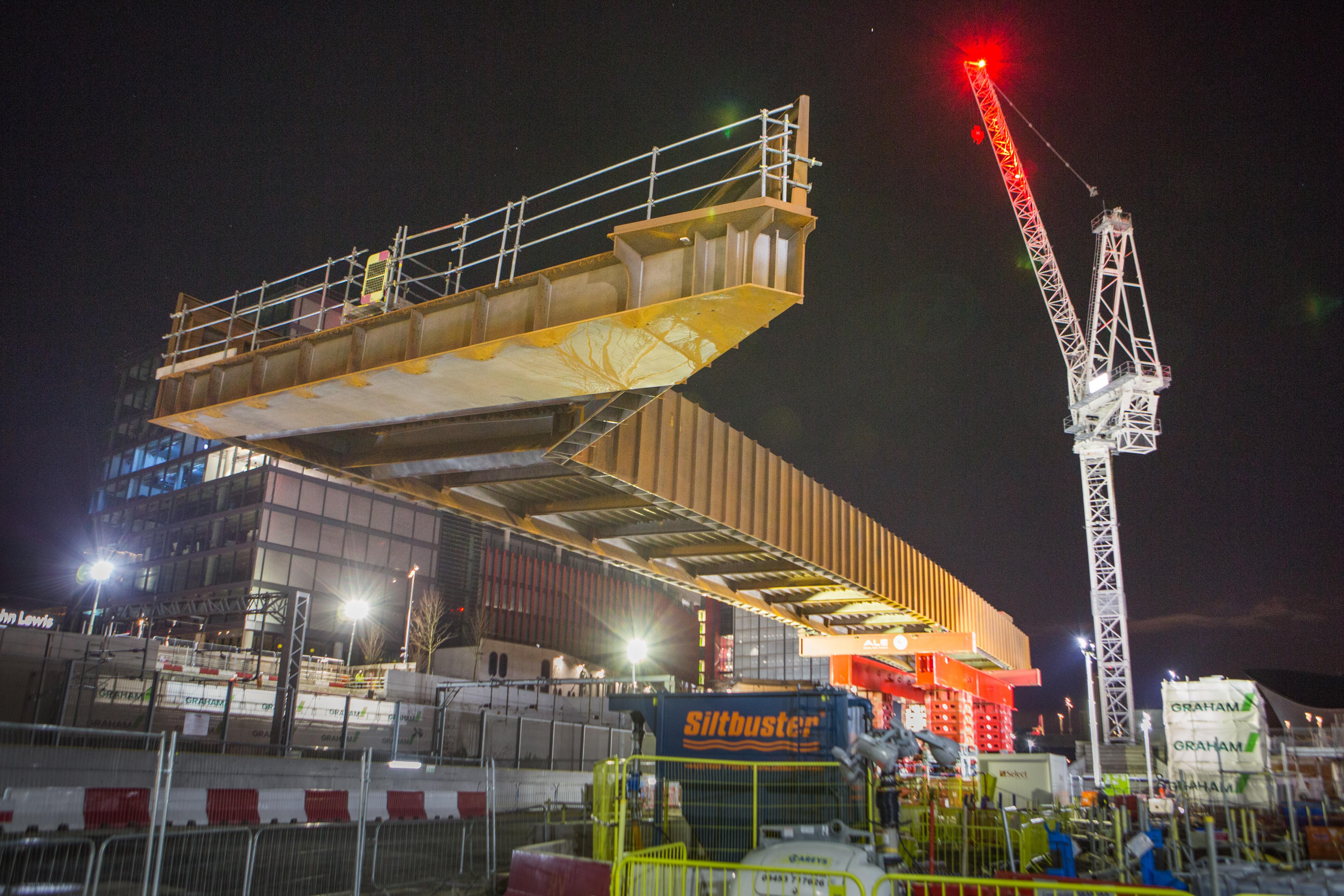 The 66 metre-long, 7.2 metre-wide and 350-tonne steel Carpenters Land Bridge was installed on Christmas Day. Work began at 3.30am on Christmas morning and was completed by 3.30pm that afternoon.

The bridge is a key part of the infrastructure for East Bank, the new £1.1 billion culture and education district being created at Queen Elizabeth Olympic Park.

The team took advantage of the rail network Christmas shutdown to rotate the bridge into position and minimise disruption to three Network Rail lines, two DLR lines and Carpenters Road.

The bridge deck was transported and manoeuvred into place using self-propelled modular transporters (SPMTs) in a jacked-up position circa 8-9 metres above ground level. It was supported on the SPMTs in a cantilever arrangement with a large counterweight of 450 tonnes to balance it during installation.

By using SPMTs rather than a traditional crane reduced the risk of having to cancel due to potential high winds, particularly at this time of year.

“We’re very pleased to have successfully delivered the installation of the new Carpenters Land Bridge at East Bank. I would like to give special thanks to our project team, which worked tirelessly throughout the night of Christmas Eve and into Christmas Day to ensure the bridge was installed without any disruption to the rail network.

“The dedication and commitment of our people are huge assets for us and have been pivotal in delivering these works. Without their hard work during the Christmas period we would not have achieved this major milestone in the East Bank scheme, so it is only right that their efforts are recognised.”

“Our thanks go to all the hard-working construction staff who have made fantastic progress, especially those from GRAHAM and their contractors who were hard at work over the Christmas holidays to deliver this fantastic new bridge.”

“The installation of the Carpenters Land Bridge is another key moment in the East Bank development. It will provide access to local people and visitors from around the globe to the world-leading institutions that are set to be based at the country’s new powerhouse of culture, education, innovation and growth."

With the bridge in place, the team will complete drainage works to the bridge’s deck, earthing and bonding protection, and install a waterproofing system. The bridge works are due to be completed in spring 2020.