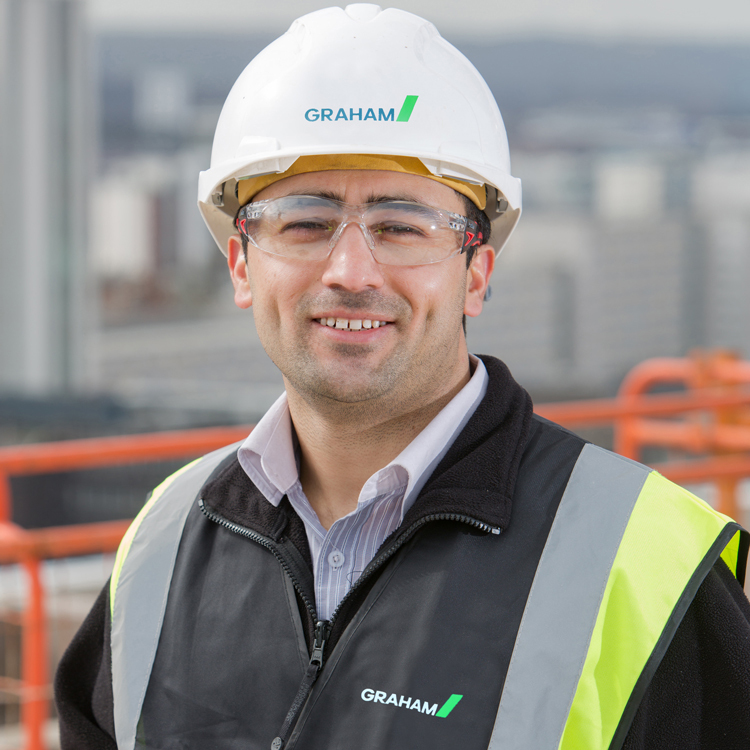 Just months shy of his 18th birthday, Shams Rahimi arrived in Scotland alone from his home country of Afghanistan as a refugee. Now aged 25, he is well on his way to a successful career in the construction sector, thanks to a combination of determination, perseverance and downright good luck.

Initially keen on pursuing a career in architecture, it was watching episodes of construction television series Megastructures on YouTube that sparked an interest in civil engineering.

Shams enrolled in an NC course in civil engineering at Glasgow Kelvin College, drafted a CV and sent it off to numerous construction companies in the hope someone would help him break into the industry. He received few replies, and those that did respond wanted experienced candidates. Finding himself in the catch-22 situation of being unable to find work without experience, and being unable to gain experience because no one would take him on, Shams took the initiative and hit the street.

“I thought, instead of waiting and getting a qualification from college and university and then going and looking for work, it's best to just start looking for work now and build up experience at the same time if possible. I applied online and then I thought, ‘let's go to the construction sites and speak to managers on site. It might just make them think this guy is interested, walking to different sites and actually making the effort'.”

Not far from where Shams was living, we had an active site at Govan Underground Station and, as luck would have it, on the day he went along, Construction Director John McHugh was visiting the site.

John noticed Shams had been waiting in the office for a while and asked how he could help.

“I explained to him that I had just started college and I was looking for work experience. As I remember, I said to him I wasn't so much worried about money; I just wanted to apply what I was learning at college on site.”

Shams left his details and was contacted for an interview weeks later, in which he was successful. During his first year at college, he worked part-time for us and the following year, the firm offered him a Modern Apprenticeship. He now had the opportunity to build experience, make money and earn a qualification.

“The first job that I was working on was a multi-storey car park in East Kilbride. At the start, to be completely honest, I was doing almost nothing,” Shams admitted.

“I was mostly observing what other people do on site – the managers, the engineers on site – how they work and the way they work with other trades on site…but as we went along I started doing it myself, and as I kept doing it my confidence grew.”

Currently, Shams is working as a trainee site manager at our Scotway House student accommodation development near Glasgow Harbour. His role involves dealing with the dimensional control of the project, as well as other aspects including groundworks, drainage, health and safety, steel erection, and quality assurance of materials.

Shams will now start an undergraduate degree in civil engineering at Heriot Watt University through the Graduate Apprenticeship scheme.

When asked what he's hoping to do once he graduates university, Shams replied:

“For now, I'm hoping to just continue to develop and become a good site manager and then move up and eventually become a good project manager. It's probably years and years away but that's what I'm aiming for. So far I've been working with very good site managers and project managers…working with these people, I'm hoping to become like them in the future.”

Shams said that being employed by GRAHAM had made a "big difference" to his life.

“Shams is a great example of someone who has come in as an apprentice and utilised every opportunity and learning curve thrown at him.

“It’s great to see him progress on to the Graduate Apprenticeship scheme and I have no doubt that he will go on to have a successful career with GRAHAM. By sharing his story, it’s our hope that we see many more people like Shams use the scheme to get on-site experience while furthering their education.”

This article was written by Fraser Rummens and featured in Project Scotland – The Scottish Construction News Magazine.