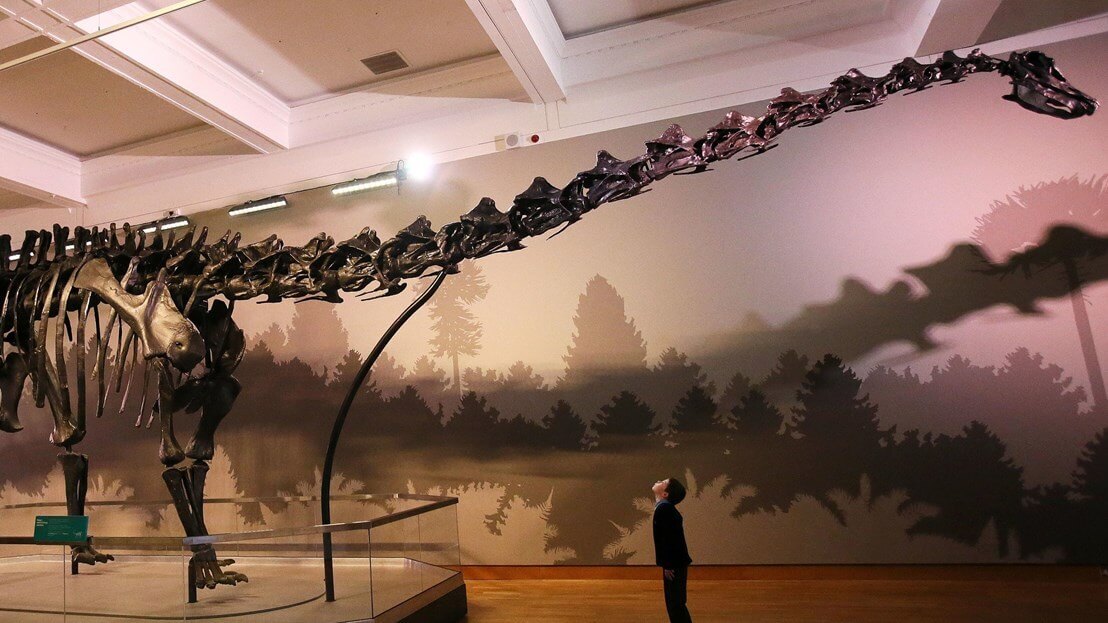 (Pictured): A schoolboy is captivated by Dippy the Dinosaur at the Ulster Museum where GRAHAM installed a new heating system

With less than two weeks to go until Christmas Day, excited children continue to flock to make-shift grottos across Belfast to visit Santa Claus.

Unusually for the festive season, the man in the red suit is facing stiff competition for the undivided attention of the city’s kids.

That’s because a much larger, but less mobile source of imagination remains a star attraction.

‘Dippy the Dinosaur’, or ‘Dippy the Diplodocus’, a 70ft-long (21m) replica of a Diplodocus consisting of 292 bones, is captivating visitors, young and old alike, at the Ulster Museum in Botanic Gardens (Belfast).

As part of a road trip across the UK, Dippy has ventured out of his London home at the Natural History Museum for the first time since 1905.

He is now on display at the Ulster Museum until 6 January 2019, having been in temporary residence since 28 September 2018.

Painstakingly, the plaster cast of fossilised bones took a full week to be assembled by a team of four technicians and two conservators from the Natural History Museum.

However, it was not just the exhibit that needed detailed preparatory work to coincide with Dippy’s arrival.

So too did the museum building’s infrastructure, specifically its heating which required the installation of an entirely new system.

“The arrival of ‘Dippy’ to the Ulster Museum was a massive coup for the Museum as there were a lot of rival venues hoping to house the exhibit, and the data has shown that visitor numbers have surged enormously where ‘Dippy’ has been on show.

“In anticipation of increasing numbers of visitors to the Museum, and to modernise its heating, we were appointed by the management team to install an entirely new system. Working closely with the museum’s estates team, we completed a detailed programme of mechanical and electrical control works, which have significantly enhanced the quality of heating throughout the Museum.

“As visitors continue to flock to the exhibit, we are proud to have played our part in helping to make Dippy’s epic journey that bit more comfortable.”

(Pictured): Standing tall - Dippy the Dinosaur at the Ulster Museum

Completed on time and within budget, our in-house delivery team carried out the following headline tasks: